AMRITSAR, India — The groaning, clattering machines never stop, transforming 12 tons of whole wheat flour every day into nearly a quarter-million discs of flatbread called roti. These purpose-built contraptions, each 20 feet long, extrude the dough, roll it flat, then send it down a gas-fired conveyor belt, spitting out a never-ending stream of hot, floppy, perfectly round bread.

Soupy lentils, three and a third tons of them, bubble away in vast cauldrons, stirred by bearded, barefoot men wielding wooden spoons the size of canoe paddles. The pungent, savory bite wafting through the air comes from 1,700 pounds of onions and 132 pounds of garlic, sprinkled with 330 pounds of fiery red chilies.

It is lunchtime at what may be the world’s largest free eatery, the langar, or community kitchen at this city’s glimmering Golden Temple, the holiest shrine of the Sikh religion. Everything is ready for the big rush. Thousands of volunteers have scrubbed the floors, chopped onions, shelled peas and peeled garlic. At least 40,000 metal plates, bowls and spoons have been washed, stacked and are ready to go.

Anyone can eat for free here, and many, many people do. On a weekday, about 80,000 come. On weekends, almost twice as many people visit. Each visitor gets a wholesome vegetarian meal, served by volunteers who embody India’s religious and ethnic mosaic.

“This is our tradition,” said Harpinder Singh, the 45-year-old manager of this huge operation. “Anyone who wants can come and eat.”

India is not only the world’s largest democracy, it also is one of the most spiritually diverse nations. It was born in a horrific spasm of religious bloodshed when British India was torn in two to create a Muslim homeland in Pakistan. Yet from the moment of its independence, India has been a resolutely secular nation and has managed to accommodate an extraordinary range of views on such fundamental questions as the nature of humanity, the existence of God and the quality of the soul.

Indeed, few places in India demonstrate so clearly the country’s genius for diversity and tolerance, the twin reasons that India — despite its fractures and fissures — has remained one nation.

Sikhism, which emerged in the Punjab region of India in the 15th century, strongly rejects the notion of caste, which lies at the core of Hinduism.

The Golden Temple, a giant complex of marble and glittering gold that sits at the heart of this sprawling, hectic city near the border with Pakistan, seeks to embody this principle. Nowhere is it more evident than in the community kitchen, where everyone, no matter his religion, wealth or social status, is considered equal.

Guru Amar Das created the community kitchen during his time as the third Sikh guru in the 16th century. Its purpose, he said, was to place all of humanity on the same plane. At the temple’s museum, one painting shows the wife of one of the gurus serving common people, “working day and night in the kitchen like an ordinary worker,” the caption says.

Volunteerism and community support are other central tenets of Sikhism expressed in the langar. When the Mughal emperor Akbar tried to give Guru Amar Das a platter of gold coins to support the kitchen, he refused to accept them, saying the kitchen “is always run with the blessings of the Almighty.”

Ashok Kumar, a Hindu with a scraggly beard, has been coming to the kitchen for the past five years — all day, almost every day — to work as a volunteer. “It is my service,” he explained, after reluctantly taking a very brief break from his syncopated tray sorting.

A white rag covered his head, and his hands were bound like a boxer’s. His job is to man the heavy bucket that receives the dirty plates and bowls. He is the last man on a highly organized line that begins with collecting the spoons, dumping out any leftover food, then loading giant tubs of dirty dishes bound for the washing troughs.

Plates and bowls fly at him, but he never misses a beat, using a metal plate in each hand to deflect the traffic into the tub. Plates go around the rim, while bowls get stacked in the middle.

Mr. Kumar used to be a bookbinder.

“I feel happy here,” he said when asked why he had given up his old life.

Indians of all faiths come here to find a measure of peace largely unavailable in the cacophony of the nation’s 1.2 billion people. Like the thousands of pairs of shoes left at the temple gates, the chaos and filth of urban life are left behind at the marble entrances.

The temple is a world of cleanliness and order — where the wail of the harmonium and the shuffling of bare feet are the only sounds, and every square inch is scrubbed many times a day.

It has not always been a peaceful place. A Sikh insurgency, which sought a separate homeland for Sikhs in Punjab, tore at India’s heart in the 1970s and ’80s. In 1984, Indira Gandhi, then the prime minister, ordered a bloody raid on the temple. Hundreds of militants were hiding there, and many were killed. The temple was also damaged. Sikh bodyguards later assassinated Mrs. Gandhi to avenge the attack on the temple.

Despite this history, Sikhs remain resolutely a part of India’s mainstream, holding leading positions in the arts, government and business. India’s current prime minister, Manmohan Singh, is a Sikh.

Pankaj Ahuja, who owns a medical supply shop in Rajasthan, was visiting the temple for the third time, this time bringing his wife and son, who had never been before. They took the Golden Temple Express train, and were sleeping in the pilgrims’ dormitories, which are also free. The family is Hindu, but the temple has a special significance for them nonetheless.

“You have lots of religious places in this country,” said Mr. Ahuja’s wife, Nikita. “But the kind of peace and cleanliness you find here you won’t find anywhere else.”

Back home, cleaning floors would be considered degrading for someone of her status — people of low caste usually do such work. But here, Mrs. Ahuja happily scrubs floors.

“In normal life, I would ask, ‘Why should I do this?’ It is shameful to clean floors,” she said. “But here, it is different.”

Indeed, she never gives a moment’s thought to who prepared the food in the kitchen, even though in India’s highly stratified caste traditions such matters are vital.

“It is more than food,” she said of the meals that she had eaten at the community kitchen. “Once you eat it, you forget who is cooking, who is serving it, who is sitting next to you.”

Anil Kumar, a 32-year-old Hindu, was up to his elbows in soapy water at one of the washing troughs.

But he said he tried to come for at least an hour every day to wash dishes. “It is not a question of religion,” he added. “It is a question of faith. Here I feel a feeling of peace.” 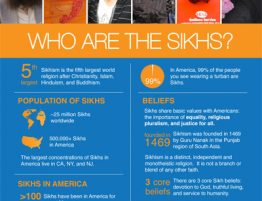